Salesforce: Buy Now And Hold For The Long Term

Salesforce has fallen roughly 14% since its 52-week high.

Salesforce has grown strongly with revenue growth rates above 20% for the past 10 years.

Furthermore, Salesforce is undervalued by roughly 9% based on my estimates.

Salesforce Inc. (NYSE:CRM) stock price has fallen roughly 14% from its 52-week high, mostly due to the rotation away from software companies. Despite the drop in share price, I believe that Salesforce is a leader in its space with growing switching costs. At $144, it is undervalued by roughly 9% based on my base-case assumptions. 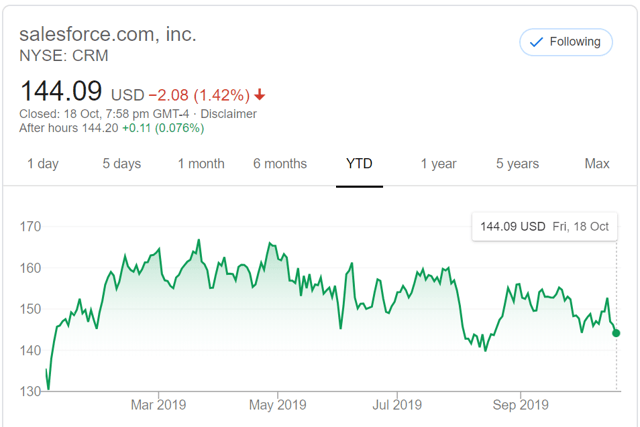 Salesforce has been experiencing strong growth with a large addressable market

Salesforce pioneered the software-as-a-service model, with sales automation as their first solution. Since then, it has expanded into the service cloud, marketing cloud, and the Salesforce platform. By focusing intensely on the customer, Salesforce has managed to lead in its key markets. Having a tight integration among these solutions also enables Salesforce to cross-sell its solutions among its customers, which reduces customer acquisition costs.

By being a leader in almost all its markets, Salesforce has managed to keep revenue growth above 24% since 2011. Revenues have grown from $1.6B to $13.2B from 2011 to 2019. Even though it has grown revenues beyond $13B, Salesforce still has a large total addressable market (NYSE:TAM). According to its estimates among all its markets, Salesforce has a TAM of $154B. This means it still has a long runway for growth given that its current revenues are only 8.4% of the total addressable market. Moreover, chief information officers have mentioned that digital transformation is currently one of the top priorities. With Salesforce being a leader in many of the mission-critical workflow automation tools, it is likely to capture most of the upcoming growth.

By being a leader in almost every market it serves, Salesforce has managed to carve out a moat mainly in the form of switching costs. Its sales cloud is a mission-critical software that helps drive revenue for users. The service cloud also helps Salesforce retain customers so it indirectly contributes to revenue generation. As such, IT managers are unlikely to switch away from sales and service Cloud because of the risk of implementing a new solution. Even if other solutions appear cheaper, they are unlikely to risk lost productively to try new sales automation software.

Marketing and commerce cloud are newer additions to Salesforce’s offerings and they are likelier to have originated from the company’s sales cloud. These additions were a result of acquisitions so the leadership position is not as strong its core sales cloud offering. However, once customers use the marketing and commerce solutions by Salesforce, it is less likely they will switch to competing offerings. Even though the switching costs are weaker for these solutions, it exists in a less elaborate form.

The salesforce platform also enjoys high switching costs and network effects. Once customers integrate their applications and data onto the Salesforce platform, it becomes even more difficult for them to switch. As more developers build apps on Salesforce’s AppExchange, it creates a cycle of expanding users and developers.

This combination of standalone clouds that are highly complementary and integrated have strengthened Salesforce’s moat in the enterprise software space.

The recent $15.7B acquisition of Tableau, along with many other acquisitions in the recent past is a sign of the drivers for future revenue growth. The key concerns here will be whether Salesforce is overpaying for these acquisitions and whether they could be integrated well into the company. Investors who do not prefer inorganic growth might want to stay away from investing in Salesforce.

Marketing and commerce clouds are newer markets that Salesforce entered through acquisitions. Given the acquisitions, it appears that revenue growth is the priority now and not optimizing for profitability. As these are areas with new competitors, it might put some downward pressure on margins as Salesforce incurs acquisition, integration, and marketing costs.

Salesforce is undervalued based on my estimates

To value Salesforce, I used a DCF model with the following assumptions:

The value I derived for Salesforce is roughly $121B for the entire company. This represents an 8.8% upside from its current price. As with all DCFs for high-growth companies, my point estimate valuation of $156.60 is likely to have a large spread of possible outcomes. To overcome this shortcoming, I compare its pricing multiples against similar software companies.

Compared to other high-growth peers, Salesforce looks fairly priced in terms of price/sales and EV/sales ratios. Salesforce is more expensive than Oracle which has lower growth but cheaper than Adobe and Workday which have higher profitability or growth. However, Salesforce is priced much cheaper than Adobe even though it has similar growth rates. Once operating leverage kicks in while maintaining high growth rates, Salesforce might experience a multiple expansion. If Salesforce’s sales multiples become similar to Adobe, there could be a 50-60% upside in Salesforce’s stock price.

Assuming a conservative 8% growth rate in Salesforce total addressable market, Salesforce’s TAM should grow to roughly $330B in 2029. A 20% growth rate for the next 5 years implies that Salesforce will capture roughly 35% of its TAM by 2029. However, bigger-than-expected market expansion or larger market share capture by Salesforce would provide an even greater upside to its valuation. Potential investors have to decide if they believe in the strong growth of the cloud SaaS space and Salesforce’s leadership in this space. If the underlying trends remain intact, Salesforce is likely a good buy now.