Is WeWork the next Theranos? 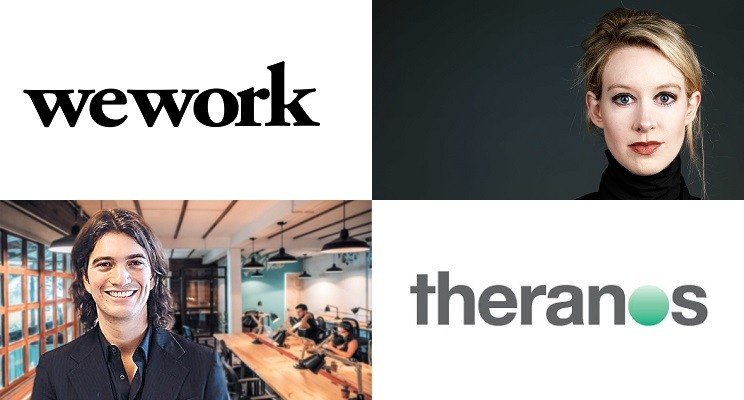 As a business owner, I love the concept of WeWork. Having spent almost 20 years paying high office lease costs while locked into 3 - 5 year rolling contracts with ruthless landlords, the concept of leasing office space as and when my company needs it, at affordable rates with minimal commitment, is just awesome.

My love of WeWork was further cemented after I listened to an interview with one of its founders Miguel McKelvey, who spoke about coming to New York and not being able to find a desk to work from, and how this problem inspired him to make high-quality office space available to everyone everywhere.

So I wasn’t surprised to learn that WeWork has been able to raise billions of dollars in funding and has even become New York’s largest tenant. This seemed like a classic story of two poor iconoclasts finding a glitch in the elitist system and making the world better for everyone!

But now I’m not so sure.

You’ve probably heard about Theranos, the company that raised hundreds of millions of dollars based on their promise of reducing blood testing to a simple finger prick. Horrifying needles and vials would be gone forever, and lives would be saved via the early detection of health risks after everyone could afford more regular painless blood tests.

The Theranos story is reality better than fiction, if you haven’t done so already I highly recommend reading Bad Blood by John Carreyrou. Or you could just wait for it to become a film. It’s that entertaining.

Sorry to ruin the ending if you don’t know it, but Theranos turned out to be a big fraud. The company’s CEO Elizabeth Holmes basically sold an unachievable dream to a bunch of rich people and politicians, who ended up begrudgingly accepting that it was just that. Holmes somehow isn’t now in jail, but she’s unable to run a company for a while, after which I’m sure she’ll die her hair and try something similar again.

But to me, the really interesting thing isn’t that Theranos is a rare and unique story, it’s how similar the Theranos story is to the stories of so many other heavily funded tech companies that have never, and may never, make a profit that comes close to justifying their valuations. And this arguably includes WeWork.

WeWork is not a fraud like Theranos. Their service works, millions of people love it, it’s growing fast, and making millions in revenue. The issue I see is their business model, which could be as unachievable in the long term as comprehensive blood testing from a finger prick.

In most regards, there’s nothing dramatically different about WeWork’s business model. Like many other businesses before it, it leases property and then sub-leases this property to tenants. And they hope that the rent they collect from their tenants covers their costs. So how is WeWork different?

Well, there’s one massive difference: WeWork has a huge amount of capital and hasn’t had to worry about making a profit. This means they’ve been able to set up spectacular offices, making those of incumbent office providers look dated and bland, while charging lower rental rates with less commitment from their tenants. And what potential tenant wouldn’t be blown away by this proposition?

The result has been massive growth, and massive losses. Last year WeWork more than doubled its revenue to $1.8 billion, but also doubled its net loss to $1.9 billion. Yes, you read that right, their operating costs are more than twice their revenue .

Now perhaps I’m missing something, but as a long-term tenant with many colleagues in the property space, this simply doesn’t look like a viable long-term business model that justifies a $47 billion valuation. And as John Carreyrou discovered when speaking with blood testing experts when researching Bad Blood, who told him a finger prick test simply won’t work, many property sector experts are saying similar things about WeWork’s business model.

So while WeWork isn’t fraudulently lying about their products and services, floating their business based on their unproven business model is arguably quite unethical. And that’s exactly what they’re about to do, with rumours indicating their IPO will value their business at $47 billion, and make the founders and their investors billions as they cash out shares.

So let’s go back to Theranos and look at just some of the similarities between the two businesses:

The amazing thing about all of this is that WeWork isn’t unusual. Running alongside it is Tesla, Uber and an ever-increasing number of unicorns with billionaire founders and no profits. And they may never be profitable, but why stop funding them when their investors make money irrespective of this minor issue. As long as they get out before the business model is proven to be flawed.

Perhaps I’ve been born in the wrong generation, sitting here thinking that profit and proven business viability should be relevant hurdles to being able IPO and/or cash out of a business, but none of this seems right to me. And just because Theranos was proven to be a complete fraud doesn’t completely distinguish it in my mind from any of these other businesses buying growth and cashing out at high valuations pre-profit.

Like cheap debt, this dynamic is just another way of distributing wealth from the masses to a select few, and I don’t think it’s good for anyone other than those select few.

All things aside, it’s going to be a very interesting next decade in the tech space. I just hope there’s not too much bad blood when it’s all said and done.